Everything a brand needs to succeed is already within them. They just need someone to brush away all the nonsense and uncover the unique beauty they offer. That’s where Jason comes in.

Always the oddball of his family, Jason never lost his playful desire to ask ‘why.’ Raised in Grand Haven, Michigan, he knew at an early age he wanted to be a designer. After studying Communication Design at Syracuse University, he spent a few years in Los Angeles until settling in Sarasota, Florida.

Jason has been building brands from multiple angles since 2004 as an Art Director, Creative Director, and Strategist for in-house departments and boutique agencies. He’s guided nonprofits, small to medium businesses, and series A to C startups towards clear, distinct, and effective strategic brand value.

Jason’s joy of design became the catalyst for his love affair with strategy. The challenges, nuances, and skills he discovered while developing the identity and packaging for the Ziivaa belt were nothing short of a good struggle. But ultimately, it's his mindfulness and meditation practice that shapes his empathetic, compassionate approach to brand strategy.

He believes everything a brand needs to succeed is already within them. They just need someone to brush away all the nonsense and uncover the unique beauty they offer. That’s where Jason comes in. He finds ease and flow whenever he can dive deep into complexity, uncover the root source of value, and simplify it so people can connect with each other.

Whether new places, new foods, new people, new ideas – or better yet, all four – a perfect weekend is full of exploration. He loves to balance his time outside hiking, mountain biking, or playing soccer with his son with being a couch potato and binge watching documentaries.

The latest from Jason 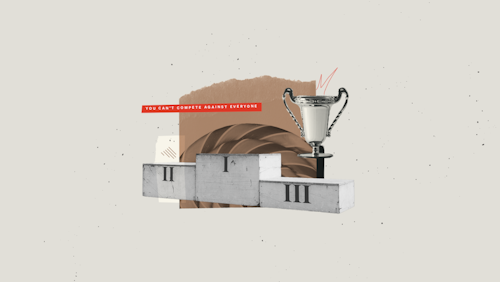 How To Identify Your Competitive Landscape