The Biggest B2B Value Driver in the Intangible Economy

N NFT sales. Cryptocurrency fluctuations. The metaverse. All are just the tip of the iceberg of a broader economic movement. In his blog, Bill Gates called it “one of the biggest trends in the global economy that isn’t getting enough attention.” That trend is the investment in intangible assets.

For high-growth companies, your most valuable intangible asset is your brand. Over the last decade, leading B2B companies have made a shift towards intangibles by heavily investing in assets such as intellectual property, licensing, and brand. But what is most overlooked is how branding is the glue that connects all of these pieces of innovation capital, and how it increases the value of the tangible and intangible assets around it beyond the sum of their parts.

When high-growth companies invest in branding, we can see a direct financial correlation by watching a company’s value pre- and post-branding. One example is Braze, a leading customer engagement platform originally founded as Appboy in 2011. After raising $20 million in Series C funding in 2016, the B2B tech company chose to depart from its startup look. After working with Lexicon to rename, Braze hired Focus Lab to create a brand that was just as powerful as their platform. In 2018, the Braze brand as we know it today was launched publicly. That same year, they raised $80 million Series E. Just three years later, they announced their IPO on the Nasdaq, raising $520 million and a market value of $8.4 billion.

And it’s not just tech companies. Even in industries that are slow-growing or are traditionally tangible asset-heavy (such as CPGs), brand allows businesses to outperform their competitors, even making them more resilient during economic disruption or within a highly competitive market.

One drawback of intangible assets is spillover, which competitors can take advantage of. Your company may possess a patent, but your peers can invent around it. Netflix can create a streaming platform, but so can Hulu.

However, brand is the one intangible that is much less likely to be affected by spillover because it is understood that brand must be different in order to succeed, especially for newcomer and challenger brands. If two competitors launch two brands that look the same, both lose. If Lyft created a brand that looked exactly like Uber, it would either hurt both companies or justify Uber as the category king and position Lyft as a follower brand.

Intangible assets are also scalable. A cup of coffee has a cost every time it is produced. Brand has an up-front cost, but can then be produced infinitely at next to nothing. There’s no cost associated with using your logo a million times any more than reproducing your SaaS IP a million times.

Starbucks is a well-known example of the value created through brand. When you think of Starbucks’ physical assets, one of the obvious things that comes to mind is their coffee. For many, the coffee itself isn’t remarkable and it’s also not the cheapest — almost a third more than the average cup of coffee in the United States. But, for consumers, the consistent brand experience justifies the cost while building a legion of loyal customers. With brand strategy, communications, and visual identity all working together, an unstoppable brand is created and in turn, a powerful culture and mission: “To inspire and nurture the human spirit.” Without this intangible asset, Starbucks blends in as just another coffee company in a crowded market. A cup of Starbucks coffee without the brand looks like another cup of coffee.

As of 2021, Starbucks’ brand value is estimated at approximately $13 billion, which translates to a whopping 44% of their assets. This is a 58% increase from just five years ago. And it’s just one of many top companies increasing their investment in their brand.

Brand increases the value of other intangible assets.

Not only can brand add value to physical assets, but it makes companies unstoppable when combined with other intangible assets. According to McKinsey, “Companies that have invested across all categories of intangibles are further ahead in their digitization journey, less likely to be disrupted because they are highly innovative, and highly likely to be able to attract top talent and retain it.”

One example of this brand-based synergy is Les Mills, a New Zealand-based fitness company. Founded more than 50 years ago and owning no clubs and no equipment, Les Mills has grown into one of the leading international fitness programs in more than 100 countries.

How? Intellectual property, licensing, and brand.

Les Mills has built 23 proprietary programs such as BodyPump and RPM, which are made accessible through license agreements by 18,000 clubs worldwide and a subscription-based fitness app. These programs are constantly evolving and innovating; programs like The Trip offer an immersive indoor cycling experience, signaling a future that blends fitness and virtual reality. By updating its programs regularly with new content, licensing it, and leaning into digital innovation, Les Mills has scaled with agility through omnichannel fitness offerings.

Where IP and licensing provide the engine, brand is the rocket fuel. The Les Mills brand is infused into every touchpoint, from branded equipment to a globally consistent customer experience to messaging that rallies audiences around its vision for “A Fitter Planet.” The result? A cult following of more than 6 million participants each week which, in turn, has exponentially amplified the value of its IP. It’s a brand I’m personally familiar with, and it’s the reason why I’ve continued to be a loyal fan for the last 15 years.

Geoff Dyer, president of the multinational chain Crunch Fitness, described the Les Mills brand: “There isn't another brand that even comes close to what Les Mills offers. People who teach Les Mills are very passionate about the brand and what it stands for … That's where the value is, through the integrity of the brand.”

These three intangible assets are what allowed Les Mills to experience radical growth even during a global pandemic; from 2020-2021, subscriptions increased by 300%. And as their IP and licenses continue to grow, the brand scales with them.

In an intangible economy, brand is more important than ever.

Today’s companies cannot rely on investment in tangible assets to stay ahead. Information is increasingly accessible, competitors can copy faster than ever, and customers have more choices than ever before. What cannot be successfully copied is your brand, and the unique emotional connection it enables your business to create with your customers.

When I reflect on why I’ve been a fan of Starbucks and Les Mills for the last 15 years, it’s not because their products are radically inventive. The coffee and fitness markets are flooded with new competitors every minute. It’s because their brands enhance everything around them: from creating a welcoming coffee experience to a fitness culture that inspires us to be brave, united, and world-changing.

And an exceptional brand experience is something that cannot be touched.

Sources:
“Getting Tangible about Intangibles: The future of growth and productivity?”– McKinsey, 2021
Starbucks Brand Value– Interbrand, 2021

Photo by Tony Sebastian on Unsplash

Branding Is More Than a Logo 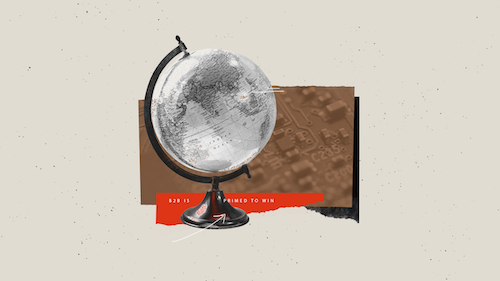 B2B Branding in the Modern World